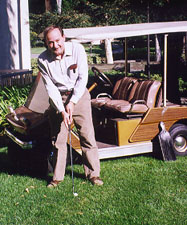 William L. Johnson is the Ruben and Donna Mettler Professor of Materials Science at Caltech. He received his B.A. in physics from Hamilton College and his Ph.D. in applied physics from Caltech. He spent two years at IBM's Thomas J. Watson Research Center (1975-77). He held a Visiting Professor appointment at the Metal Physics Institute in Gottingen, Germany (1983) and received a Von Humbolt Distinguished Scientist Fellowship in Gottingen (1988). He is the 1995 recipient of the TMS/AIME Hume Rothery Award for his experimental work.

Professor Johnson served on the editorial board of the Journal of Rapid Solidification, and serves currently as an associate editor for Journal of Applied Physics, and Applied Physics Letters. He is a principal editor of the MRS Journal of Material Science. He is author or co-author of over 230 publications in the scientific literature, and has contributed chapters to seven books. He has held numerous consulting positions for the Department of Energy, NASA, and corporations.